To share your memory on the wall of Paul Hancy, sign in using one of the following options:

A receipt has been emailed to the address provided. A receipt may also be printed.

AVON - Passed away June 1, 2021 at age 90. He is survived by his loving wife of 64 years, Theresa (Zito) Hancy; sister Dorothy (Samuel) Zito; four grown children; whom he had such pride for; Deborah Moore... Read More
Paul L. Hancy

Paul was born on November 17, 1930 in Romulus, NY. Paul was the sixth of eight children of Elmer and Aimee Hancy. Paul served in the U.S. Army from 1948 - 1952, joining when he was just 17 years old. He was proud to serve during the Korean War stationed in Germany and was a member of the American Legion Post #294 and VFW Post 5292 in Avon, NY.

Paul worked for Delco for 36 years, retiring in 1988. He loved his family fiercely - his children, grandchildren and great-grandchildren were the pride of his life. All that knew him knew he was a kind hearted, fun-loving, and jovial in spirit. He will be missed by many and he will live on through his loved ones. A special thank you to the Care Team at Wilmont Cancer Center, especially Dr. Michael Cummings whom dad had utmost respect for; to Dr. Balaji and staff for the many years of care; and to Highland Hospital East 5 providers, nurses and staff!

Provide comfort for the family with a meaningful gesture of sympathy.

Show you care by sending Flowers

We encourage you to share your most beloved memories of Paul here, so that the family and other loved ones can always see it. You can upload cherished photographs, or share your favorite stories, and can even comment on those shared by others.

Posted Jun 04, 2021 at 02:25pm
Our deepest sympathies during your time of loss, may your memories give you strength

Flowers were purchased and a memorial tree planted for the family of Paul Hancy. Send Flowers

I didn't have the honor of being around grandpa Paul on a daily basis
but the few family events, the suite at Redwing game and the
countless youth baseball games that JT and Bubba played together over the years
were enough to know something about this gentle, great man.

It was obvious as obvious could be, that he had a special way about him.
His kindness and endearing smile, that made you feel better inside; just being in his presence.
The other, was that he was a proud father and grandfather.
No words had to be spoken to understand that, just a simple observation.

When I heard of the news of his passing, I shed some tears; thinking
about those very fond memories.
When my son would be on the ground, after taking a foul ball off the opposing
players bat...It would be Grandpa Paul who would make that worried father
feel better.
He would look over smile, wink and say "not sure who's son that is
but that is one tough kid". I would go from worried to assured, knowing that JT would be back up in that squat for the next pitch.
When Bubba came up with a huge hit or pitched a gem, which he often did; I would
look over Grandpa Paul's way and without saying a word - his smile and sparkle in
his eyes would tell me how he was feeling about what Ryan just accomplished.
'That's my grandson, special ain't he something'. I would give him the thumbs up
and agree, for sure someone to be proud of.

The earth has lost a beacon of light.
Fortunately that light, will brighten the skies always
and the memories will make us smile, when we think of him often.

Our deepest condolences, to the entire Hancy Family.

Such kind words, thank you so much!
HS

Flowers were purchased and a memorial tree planted for the family of Paul Hancy. Send Flowers

Posted Jun 03, 2021 at 03:04pm
In loving memory Uncle Paul you will always be remembered and may this tree stand as tall, as strong as you. With Love!

Thank you so much for the donation Brenda! 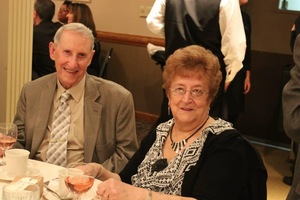 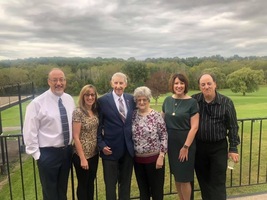